Author and Editor Lisa Haselton recently opened a conversation with me about Dark Fey, what Inspired the story; what it’s underlying Message is, and how it has effected me/ changed my life….so I just had to share it with you.
**********
My guest author today is Cynthia A. Morgan. She’s chatting with me about her newest release, Dark Fey: Standing in Shadows, which is the second installment of the Dark Fey Trilogy, and the rest of the YA Fantasy trilogy.

What is the story about? Standing in Shadows delves deeper into the mystery and suspense of the tale initiated in book one: The Reviled. In book two, readers discover the history behind the main character, Gairynzvl, in greater detail as they learn about the harrowing life he endured among the Reviled Fey of the Uunglarda, as well as the terrors of The Integration; the process of intentional cruelty and neglect designed to twist childfey into Dark Ones.  Although Standing in Shadows reaches deeper into the shadows, it never strays entirely out of the Light, relating a tale of both fear and hope as readers share Gairynzvl’s challenges to return into a restored life.

Who is the main character? As in Book One, Gairynzvl is still the central character.  He is a Fey of the Light who was abducted by The Reviled at a young age and was forced to endure life among them for nearly 15 years, but he never lost hope of returning into the Light and his courage and conviction are what drives the story, as well as his purpose. Standing in Shadows, however, is more of an ensemble than book one, bringing several characters into the main plot. Without each of them, Gairynzvl cannot fulfill his purpose and readers come to know each of them throughout the tale as they become involved in Gairynzvl’s plan. 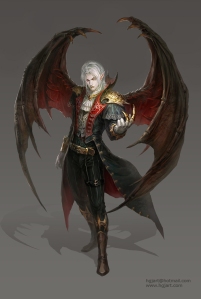 What inspired this tale? Although certainly darker than book one, Standing in Shadows does not incorporate this level of horror simply for the sake of it. One does not need to open the pages of a book to discover the unthinkable, as the darkness typically embodied in fantasy genre stories by some terrifying being or creature is very much alive in our own reality and this is the underlying motivation for the darkness woven into Dark Fey.  Standing in Shadows was based in great part on the terrifying, yet true-life events of the Lord’s Resistance Army or LRA, a rebel militant group in Uganda that has for over 20 years abducted children from their homes; forcing them to commit horrifying acts of violence against each other and their own people. These children suffer a very real Integration and, like the childfey of Jyndari, they endure violence, starvation, multiple rapes and beatings at the hands of truly sadistic overlords.  This is how the Reviled came to life and became the horrifyingly cruel beings depicted in Dark Fey.

How did the story come to you? The initial Inspiration for Dark Fey came to me in a vivid dream, which stayed with me for many days, growing clearer and more complex as I considered it.  Then I learned about the LRA (through watching the mini-series Long Way Down with Ewan MacGregor and Charlie Boorman). The realization that horrible things happen every day in our own realm became even more clear and the underlying message of the story solidified. “Something Must Be Done”.

Did you have to research for this novel and if so, why? Jyndari is a realm of my own making and the Fey who abide there are unlike fairies in a typical fantasy genre, so I did not need to research them.  They are their own creation; however, I did research the LRA to understand more fully what happens to the children they abduct.  Much of what happens to them is represented through intimation in the story of the childfey of Jyndari, not to add any measure of sadistic horror to the tale, but to bring to light the horrifying truths of our own world.

If you did research, what do you think surprised you most to learn and why? Learning that such atrocities happen in our own world was heartbreaking to me.  We like to think that such darkness only exists in books, but fact actually IS much stranger than any fiction.

Do you relate to your character? I do very much so.  Gairynzvl’s strength of purpose and compassion in spite of the pain he has endured comes from somewhere within me. As does Ayla’s deep empathy for others; Evondair’s Harmonious spirit; and Rehstaed’s fun-loving nature.  At least for me, when I write, my characters tend to embody some part of who I am, so I do relate to them and understand them intimately.

What made you write this character; what made them important to you or made you want to tell their story? Gairynzvl was the only prominent character in the dream I had, which inspired the Dark Fey Story.  As the complexity of his history, and subsequently his nature itself, became clear to me, I found him too compelling to ignore. You might say, just as he appeared to Ayla, he appeared to me, demanding my full and undivided attention.

Is there anything specific you want readers to know about this piece of work?  The story itself is fantasy, but the underlying significance lies in how we deal with tragedy and hardship; how the choices we make affect others, and how the decision to live a purposeful life can have a positive contribution.  Heavy stuff for a fantasy, I know.  It is also my greatest hope to be able to ultimately provide some percentage of its royalties to the work UNICEF does, specifically in Uganda.

When will the novel be available for purchase?  The Dark Fey Trilogy is available globally on Amazon and through all major retail booksellers.  It is also available on Audible and even as Japanese Manga!

Dark Fey The Reviled on Amazon
and on Audible

Dark Fey Standing in Shadows on Amazon
And on Audible

Okay, let’s learn more about you, as a writer   Who is Morgan?  I am a word devotee, through and through.  Happiest when surrounded by the beautiful constructs of Shakespeare, Austin, Dickens, Poe and the like, I fill my world with words, lyrical musings, music, and laughter.  Much of who I am and what I am about can be seen/discovered on my blog:  booknvolume.com.

What inspired you to start writing?  I have always been a writer.  Even as a child I wrote poems, in crayon! I have an abiding love of words, beautiful phrases, creating images through lyrical descriptions and weaving stories.

What is your favorite book you have written and why? Dark Fey, of course. Not only because I am proud of the story of hope it shares, but because I find the Realm of Jyndari and its Feyfolk so beautiful and intriguing.  I am already conjuring ideas for prequels and sequels and spinoffs to remain within its environs.

When you are not writing, what do you do to recharge? I love to listen to music, which never fails to revitalize the creative side of my thoughts.  I also enjoy nature, whether walking or simply sitting quietly (usually under the moon and stars!) to breathe deep and slow, take stock, and listen.

Do you read books within the genres you write? Yes, Plus some. I enjoy epic fantasy and am a Tolkien fan through and through, but I also like to read Historical Fiction, like Philippa Gregory and Classic Literature such as Austin, Dickens and Poe.  And Shakespeare is an absolute must!

Besides being an author, do you have a second job?. Yes I do work a 9-5er as an administrative secretary, which pays the bills, until my writing will 😉

What do you enjoy most about being an author?.  I love sharing my love of words with others who feel the same and being able to do something I enjoy so passionately, ultimately for employment as well as for the sheer joy of it, is a Blessing to be forever thankful for.

How can your readers connect with you? Through social media via:

Thank You Lisa for taking time out of your busy schedule to talk about Dark Fey with me 🙂
.
~Morgan~