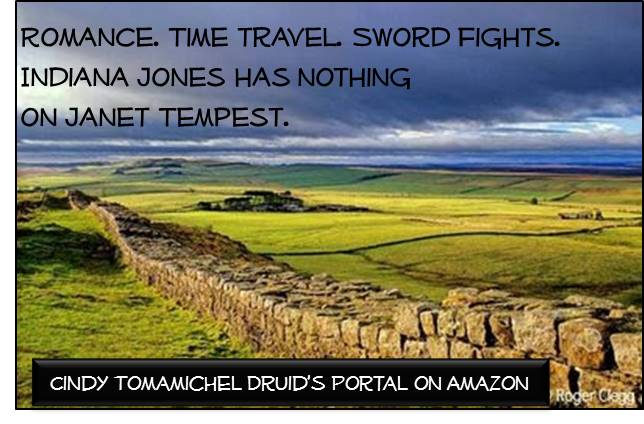 Please allow me to introduce you to Fantasy writer Cindy Tomamichel and author of Druid’s Portal.

A love that crosses the centuries.

An ancient druid pendant shows archaeologist Janet visions of Roman soldier Trajan. The visions are of danger, death, and love – but are they a promise or a curse?

Her fiancé Daman hurts and abandons her before the wedding, her beloved museum is ransacked, and a robed man vanishes before her eyes. Haunted by visions of a time she knows long gone, Janet teeters on the edge of a breakdown.

In the shadow of Hadrian’s Wall and 2,000 years back in time, Janet’s past and present collide. Daman has vowed to drive the invaders from the shores of Britain, and march his barbarian hordes to Rome. Trajan swears vengeance against the man who threatens both his loves – Janet and the Empire.

Time is running out – for everyone.

Cindy, please preface your character interview for us 🙂

Today I introduce Branwen, a secondary character from my time travel action-adventure romance trilogy Druid’s Portal. She appears at pivotal times throughout the series, as her town, Pons Aelius (now modern-day Newcastle in the UK) is a nexus in time around the area of Hadrian’s Wall. She is a Celtic woman, running the local bathhouse, with six grown children. She knows both the main characters – Janet, the modern-day archaeologist back in time to Roman Britain, and Trajan, the Roman soldier who will struggle between his duty to the Roman Empire and his love for Janet.

Branwen is bustling around the small kitchen and brushes flour off her hands before smiling in welcome.

How do you feel about the Romans?

Well, it’s been a hundred years or more since they invaded and built that wall, so we are used to them – my two boys Brack and Quintus have joined the Roman army and they will be citizens of the Roman Empire in 25years, so that is a great thing. They also brought many new foods with them, they do love their food, the Romans. Apples, spices, herbs, olives, wine, and dried fruits – although I can’t take that fishy sauce garum.

I know a lot of my Northern cousins still hate the Romans, but I have a business to run, and it looks like they are here to stay.

You rescue Janet and give her a job at the bathhouse. How is she settling in?

Well, she is pretty enough, the boys bet on how loud she will squeal when they pat her behind, and I think she enjoys the attention. I imagine she will tire of it, my goodness, I have seen enough nude men to last me a lifetime. She is a bit of a puzzle, some of the things she says.

What sort of things?

She has the fort commander Trajan Aurelius interested in her, but she pushes him away. She needs to learn life is short, and when you find a good man you need to grab him!

Sometimes she sounds like a learned teacher with stories from foreign places, although some simple day-to-day items seem to fascinate her. I saw her sketching soldier’s sandals the other day as if anyone in their right mind is interested in smelly old sandals.

He is a good man, despite being a Roman to his sandals. My boys are always talking about him. He needs to find himself a woman and settle down instead of putting himself in danger and getting into fights. You can be too fond of duty, in my opinion, but it would take a strong woman to change Trajan’s mind.

Is that all the questions? I have a pie in the oven – Branwen sniffs – there, I have work to do, I can’t stay here gossiping all day. She bustles off, following the appetizing aroma of baking.

Cindy Tomamichel is a writer of action-adventure novels, some with a touch of romance. The heroines don’t wait to be rescued, and the heroes earn that title the hard way.

Her first book Druid’s Portal: The First Journey– time travel romance in Roman Britain near Hadrian’s Wall has been published with Soul Mate publishing. She also has a number of short stories and poems published in various anthologies.

Her next book, Druid’s Portal: The Second Journey is in progress. An action-adventure time journey with a touch of romance set in Roman Britain. Keep up to date via the links below.

Thank You so much Cindy for sharing your character with us.  Sounds like a great story and one I’ll have to put on my TBR List 🙂