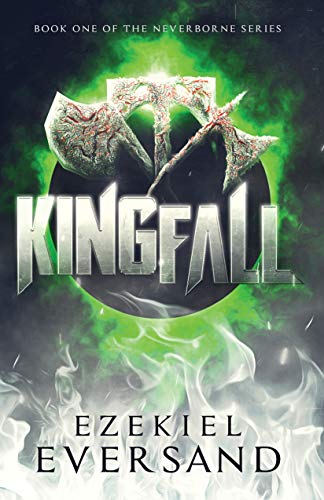 The human kingdom of Barredom has been at war with the qindrid territories of Aggedon ever since the Qindrid Curse gripped the land. What were once humans are now grey-skinned, ageless, sleepless abominations, enhanced by the shadow element of their descendancy.

When the entire border army of Aggedon vanishes overnight, the obsessive General of Barredom orders the Westwalker, the infamous hunter of hunters, to investigate the disappearance. But the actions of men may test the resolve of the outsider who was long ago forced under the cursed transformation himself.

The new cycle of Kingfall proves worthy of its name when the savage elvan king of the Glace Isles is slain during an ambush. His elite war party, along with his three legendary axes, are deposited in the dungeons of the Frostdale Deeps, the domain of the Royal Inquisitor Honorah Bayn. Her task is to extract information from the enigmatic prisoners, but her desire is to exact revenge, and her lust for suffering is set to thwart the distracting aspirations of her unwitting son and daughter.

The unusual fortune of Barredom delivers one other gift when the leader of the Aggedonian qindrid surrenders herself into the custody of the elusive king of Barredom. It’s up to the renounced prince of Barredom, Ondrew Roth, and his motley group of spurned knights to escort her on a clandestine mission beneath enemy territory, through the underground tomb of an elvan race thought long defeated.

Prepare for a dark tale where all are the many hues of grey, and where any might not be as they seem

There are fantasy writers; there are Epic Fantasy writers, and then there’s the stellar few, like Tolkien and Steven Erikson, who build an entire universe in spectacular detail just to share a side story that has little or nothing whatsoever to do with the main story, but you cannot imagine reading the story and not knowing the side story because of the skill with which it’s relayed.   Mr. Eversand’s spectacular tale is right up there in the stratosphere of extraordinary story telling alongside such masters.
Character development in this sweeping saga is remarkable and the dialog between characters scores off the charts as well.  Smiles and Norah quip and banter with the best of ’em, leading me to re-read again and again just for the sheer enjoyment of it.  There are heroes to love and villains to despise, and some very intriguing sorts that you love to despise and despise that you love!
But this story has much more than amazing characters and dialog worthy of Henry Cavil or Robert Downey Jr., oh yes!  Page one sends you careening into the tale through riveting action scenes that allow you to finally draw breath around Chapter Five!  I Could Not Put This Book Down!  There are 449 pages and each one is a sumptuous delight; a nerve-wracking edge-of-your-seat thrill; and a delicious temptation that keeps you turning pages, faster and faster and faster!
Now, don’t let me spoil it for you, but be prepared.  Prepared to be awed, swept up and away, and unable to extricate yourself from the mastery of fantasy Mr. Eversand flawlessly displays chapter after intoxicating chapter.  But draw breath.  Step back and admire…and give yourself plenty of time to devour the last 1/4 of the book because I assure you the story will latch on and not let go.
If you want a true fantasy epic, something you can not only sink your teeth into, but utterly immerse yourself in and become entirely entangled, Kingfall is waiting for you.
.

Author Bio
Ezekiel Eversand was born in Southeast Texas. He has spent most of his adult life in operations management for high-volume nightlife venues throughout his home region of Texas and Louisiana, and eventually in Las Vegas, Nevada, where he now resides. He is a travel enthusiast and absolutely loves anywhere that has a beach. He lives with his French bulldog, Hero. Creating unique worlds, characters, and stories has been his true passion behind the scenes since he was a child.
Find Ezekiel on Amazon
.
~Morgan~

Join 14,080 other subscribers
Follow Word Mongery and Musings on WordPress.com